I spent the Thanksgiving holiday with relatives in Saint Louis, Missouri. We went to the local zoopark, and I enjoyed the opportunity for some backyard and urban bird-watching. As nice as it was to see the Cardinals of Saint Louis (of course, I mean the birds not the baseball team), the ornithological highlight of the trip had to be the sighting of the Eurasian Tree Sparrow (Passer montanus).

We started out by driving around in the Dogtown community which includes the Clayton-Tamm neighborhood. After we spotted suspected Eurasian Tree Sparrows (not to be confused with American Tree Sparrows, who are not true sparrows but buntings) perched on a wire, we decided to park somewhere and walk around. Near our parking spot, songbirds could be heard, and a possible predator was lurking on a lamppost.

We headed back on foot toward the site of the drive-by sighting of suspicious silhouettes on a wire, and I had already trained my eye to scan for all of the feeding stations dutifully maintained by the residents of the neighborhood, even after a rainstorm. While walking eastward on Lloyd Avenue, just past Graham Street, I spotted a little black cheek spot like the pupil of an eye gazing out at us from the center of a shrub. This was our first confirmed sighting of the Eurasian Tree Sparrow in Saint Louis!

This is nearly the very instant of our first confirmed sighting of the Eurasian Tree Sparrow in the States
on 27 November 2011 at 12:53 CST. Indeed, they were exactly where they were supposed to be!

These photos seem to be all over the internet, but the story is not.

In 2010, French customs officers at the Rochambeau airport in Cayenne, French Guiana, after noticing some suspicious bulges, conducted an intimate pat-down of a Dutch tourist and found some tiny parcels in some very personal space.

In the previous account of poultry in space, I related the story of how chicken embryos were launched aboard Discovery STS-29, but I did not make it to the story of birds (ex ova) in space. Despite claims to the contrary, someone did indeed try to launch birds into space, and the attempt was not a total failure.

A few small and clumsy flaps for quails, quite a giant and sturdy flap for quail-kind and space aviculture!


Japanese Quails (Coturnix japonica) have ventured to the final frontier; they have even hatched on Mir. These are the same species of quails about whom I wrote before, but do not worry: reproductive foam was not the subject of these investigations.

Over a year ago, I had the privilege of attending a talk on directions in space biology given by Dr. Antonio J. Ricco, and having had so recently seen the image of the "moulting swan," I just had to ask about birds in space. He mentioned the case of launched avian embryos referring to the work of Dr. J. David Dickman, but he and his associates did not know with certainty whether there were really birds (ex ova) in space. Since then, I confess that I have eggshausted, intermittently, an eggsorbitant number of hours reading and writing about Galliformes and their embryos in space.

On the question of the chicken or the egg, eggs went first, at least to space. NASA's original attempt at chicken embryology experiments in space began as a student project. The idea was conceived by John C. Vellinger as an eighth grader in Lafayette, Indiana. Throughout high school he was entering his proposal into a contest held by the Shuttle Student Involvement Program with sponsorship of NASA and the National Science Teachers Association.J. Young and R. Krippen

Mission patch for SE 83-9 or "Chix in Space"
on which Col. Sanders is acknowledged


Vellinger claimed distinction at the district level for three consecutive years, and in 1983, he won at the national level.
The kid proved to be upwardly mobile from there and with all of the right connections. He got a little help from "The Colonel," and I do not mean an Air Force colonel. After his first year at Purdue University in 1985, NASA arranged for mentorship by Mark Deuser, an engineer who was working for Kentucky Fried Chicken, the corporation that sponsored the $50,000 incubation project and not only in the interest of becoming the "'first fast-food restaurant in space.'"

Via Birdchick, I first learned that a gynandromorphic Northern Cardinal (Cardinalis cardinalis) had been spotted by a retired school biology teacher in Rock Island, Illinois in 2009. Minnesota Birdnerd has posted additional photos of this sighting.

It was then that I decided to start up a collage of songbird gynandromorphs . . . and very shortly after that, when I realized that I was rather too busy for the undertaking. Fortunately, I was reminded of the project by recent news (and controversy) of a similar backyard sighting at the beginning of this year reported by another academic, Prof. Larry P. Ammann, who when not teaching statistics at UT Dallas, takes time to appreciate a genetic anomaly.

Last May, I spent a day in Fallbrook at Emerald Forest Bird Gardens, the very source of our Toucan beak and feather specimens (NB: No birds are harmed in this research!). The special occasion was a NOVA filming event for the "Making Stuff" series, the first part of which aired last week. I was very pleased to see that our Toucans had their moment in spotlight!

Me, Tocos, and David Pogue on 13 May 2010 at Emerald Forest Bird Gardens. I took many,
many more photos.

I met David Pogue in person! In addition to "Arrrr, they were all out of parrots," he made other silly jokes such as "Just put it on my bill." When he was holding the detached Toco Toucan bill, the live Toucans became obviously distressed about this, so he said to them "Don't worry! It was no one you know." At some point, he moved the beak to match his words as he said, "I filled out my donor card." Also, I had the privileged opportunity to see my ex-advisor being coached by the director: "Marc, don't look at the camera. Marc, you're looking at the camera. Marc! Marc, stop." It was awesome (in a vindictive sort of way).

Click here for some unpolished behind the scenes footage > > > > >

I have to confess my profound consternation over the fact that one of the top search engine terms leading to my blog includes the word "panties" And it serves as no consolation that the number one (by grand margin) search term on the list reveals what lies beneath the panties. It has been suggested that I should capitalize on that interest somehow, and that suggestion grows more appealing with every blog hit . . .

Anyway, I cannot coerce anyone into appreciating the beauty and science of birds, for that is all too apparent to me and so much so that it is even difficult for me to objectify. So at this moment I lay to rest any efforts for carefully chosen words, elucidating images, and technical minutia. Here I choose rather to provide the restless web-surfers with just what they are asking for: 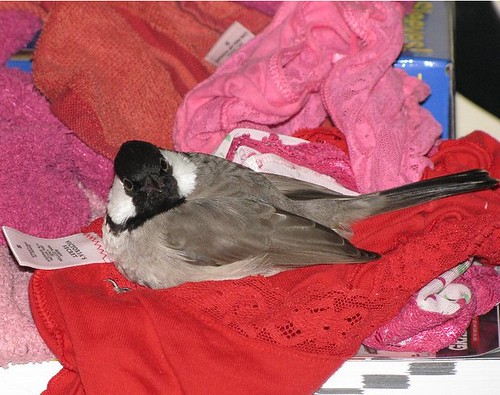 Boris shares a secret with Victoria. Don't you wish that you could too? 28 July 2010

On Saturday morning, I was roused from slumber before 7:00 AM by the unnerving machine gun style alarm calls of the Bulbuls (of which there are now four free-flying in my living room). I stumbled off of the sofa, peered out of the window, and looked for a cat. I did not see one, and yet I heard a panicked rush of aviary birds, and Bulbuls were still firing away in a relentless, distressing ensemble. So I crouched down and tried to find their line of sight, and then I saw the threat. It was a juvenile Cooper's Hawk (Accipiter cooperii) perched on the fence. By Sunday morning, I knew to grab my camera when I heard the Bulbuls' call to arms. He had returned, and even with an accomplice, I noticed as they fled.

The beam on which I hang laundry to dry doubles as a perch for a young Cooper's Hawk. The yellow irides
and breast plumage striations indicate that this visitor is a juvenile, and I surmised from body shape that he
is not a Sharp-shinned Hawk. 29 August 2010

For those who worship the Google dynasty, I am G-Buzzin':
Finch Wench on Google

I share with you the results of my hours upon hours of avian-specific web-surfing: